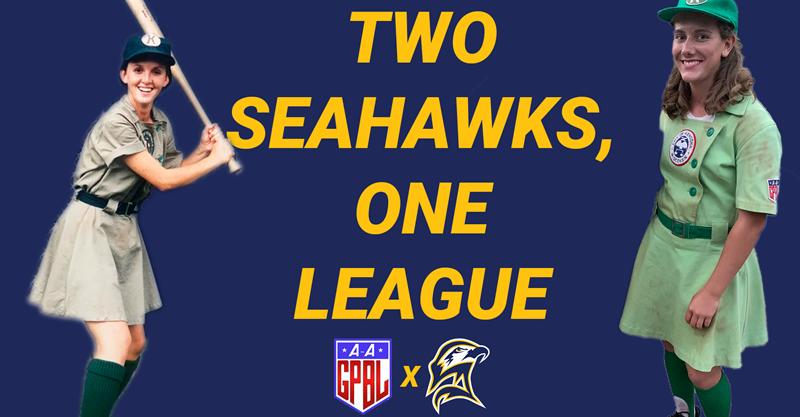 Julie Croteau '93 (Manassas, Va./Osbourn Park) and Skylar Kaplan '25 (Glen Burnie, Md./North County) made the cut for their respective baseball programs at St. Mary's College of Maryland — Croteau having blazed the trail for Kaplan and many others as the first-ever female to play collegiate baseball. But it's off the field where their life experiences parallel once again, this time Croteau and Kaplan helping to highlight a piece of baseball history that paved the way for all female baseball players.

The parallel revealed itself when Kaplan landed a part as an extra in the Amazon Prime Video streaming series "A League of Their Own": a revamp of the 1992 film of the same name, in which Croteau secured a role as a double.

"The original film educated America about the existence of the All-American Girls Professional Baseball League, which until I was a freshman at St Mary's College, I didn't even know about," Croteau said. "It had been effectively wiped out of the history books."

She said the movie also helped to "tell the varied stories of young women who were passionate about, and good at, a sport that didn't make space for them."

Now, 30 years later, women still take an interest in and play baseball. St. Mary's College has had three female baseball players in its history. Croteau, Kaplan and Kelli Jenkins, who was a member of the Seahawks baseball team in 2019 and 2020.

Croteau said she likes what she has seen so far of the new series. "I like how they're making space for some modern storylines and filling in gaps for race and sexuality."

Kaplan said the original "A League of Their Own" is one of her favorite films and says the 2022 series can help continue awareness about the history of girls and their involvement in America's favorite pastime.

An impact she is looking for the series to have, since its release earlier this month, is a change in the perception of girls and women in baseball. "The [show] is also helping spread awareness because many people say girls play baseball for attention," Kaplan explains. "That is not the case; we just don't like softball and there isn't a girls' baseball league."

She also sees the show as having the potential to inspire girls. "There are so many girls like me who [don't enjoy playing] softball and love baseball but they need to know that there are others out there like them," she said.

How two women who played baseball decades apart at the same public honors college in St. Mary's City, Maryland, came to have their lives parallel in this way seems to come down to their love for baseball and a little luck.

"I was really lucky," Croteau said. "A film student from Pepperdine University knew I was playing baseball in college and contacted me and Columbia Pictures. I was contacted by a casting agent and asked to send a picture - and pictures of my legs. Not long after, I was offered the role of a baseball double for Anne Ramsey. I don't think we looked much alike but we were both left-handed first basemen."

Kaplan, who will take the mound this spring as a right-handed pitcher for the Seahawks also found her way to show business through her participation in the sport. Specifically, her involvement with Baseball For All, a nonprofit organization whose goal, according to its website, is to "build gender equity in baseball by providing girls with real opportunities to play, coach, and lead in this sport." Kaplan has been involved with the organization since 2015.

Both Seahawks said they enjoyed their time on the set of the film and TV series, respectively. In fact, both said "so much fun" when asked what the experience was like. "One of the most memorable things about being on set was being around the actresses," Kaplan said. "They were all so nice and helpful. It was so cool to hang around and talk to people I've seen in other shows. It was also a lot of fun to experience this whole thing with many of my other friends through Baseball For All or USA Baseball."

Croteau said she still has many fond memories of being on the film set. In particular, she recalls walking onto Wrigley Field for the first time in character and playing pepper with Madonna and Rosie O'Donnell, using old-fashioned gloves and balls.

Join the St. Mary's College baseball team at the Hawk's Nest this spring to see Kaplan in action. Catch the "A League of Their Own" series streaming now and see how, as Croteau says, "it's rewarding to see that the storyline still resonates after so many years."