Virtual River Concert Series - July 24: “The Sheer Virtuosity of It” 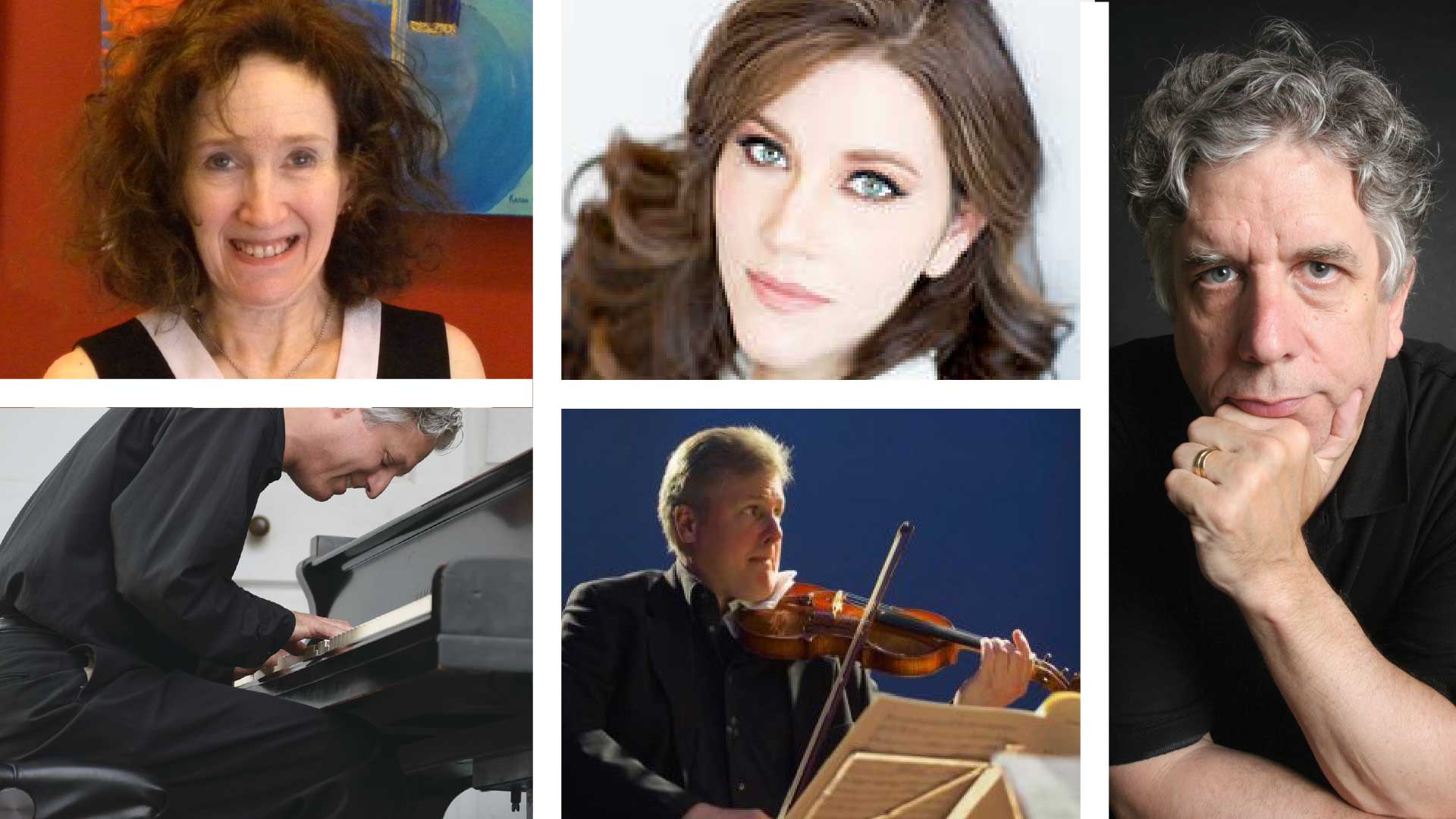 Painting Exhibition featuring works of art by these artists:

“Together and Sleep” from Concerto Domestica

“The Letter Aria from Werther”

From The Alba Music Festival

As a soloist, she has appeared with the  Jerusalem Symphony in Israel, the Hungarian Virtuosi in Budapest and Zagreb, the Czech Radio Orchestra in Prague, the Maryland Bach Aria Group in Verona, and the Chesapeake Orchestra. She has also given solo performances at Carnegie Hall, The Juilliard School, the New England Conservatory, Purchase University, Avery Fisher Hall, the Prague Rudolfinum, and the Jerusalem Theatre. Greitzer can be heard on Nonesuch Records Grammy Award-winning recording of George Perle’s Serenade No. 3. She has recorded with the Maryland Bach Aria Group on Crystal Records, and as soloist on MMC and Delos Records. Composer William Thomas McKinley wrote two concertos for her that she premiered and recorded with the Seattle Symphony and Prague Radio Orchestra, Gerard Schwarz, conductor.

Greitzer is a graduate of The Juilliard School and held a graduate fellowship at the Yale School of Music, Yale University. She is a two-time winner of the Artists International Prize for Chamber Music, recipient of the George Wellington Miles Award at Yale University, and a winner, with the Maryland Bach Aria Group, of the Norton T. Dodge Award for Creative and Scholarly Achievement. She was invited by Pierre Boulez as the only American finalist for the IRCAM  Ensemble in Paris, France, Pierre Boulez, Music Director.

Greitzer was the artistic director of the New York Times Foundation Young Performers Series, producing concerts in Bryant Park, Union Square Park and Battery Park. She was also the director of the Tidewater Ensemble at St. Mary’s College of Maryland. During that six-year period, the Tidewater Ensemble made its first appearances at Weill Recital Hall at Carnegie Hall, the Baltimore Museum of Art, and the Corcoran Gallery, Washington, D.C.

She performed in the 1998 Broadway revival of “The King and I” with Marie Osmond and at the Kennedy Center with Haley Mills. She was also the bassoonist with Anthony Newley, in the New York revival of his show, “Stop the World, I Want to Get Off.” She also worked with playwright Arthur Miller, and was the bassoonist for the New York premiere of his play, “Up from Paradise.” Greitzer is adjunct faculty in the Music Department of St. Mary’s College of Maryland.

Larry Edward Vote is professor of music at St. Mary’s College of Maryland. An accomplished vocal soloist and conductor, he has performed throughout the United States and Europe. As a member of the Tidewater Ensemble he has been heard in, and conducted concerts in, Weill Recital Hall at Carnegie Hall, The Kennedy Center for the Performing Arts, The Baltimore Museum of Art, and Jordan Hall in Boston, as well as on regional and national broadcasts of this group. A founding member of the Maryland Bach Aria Group, he may be heard in music of Bach, Handel and Telemann on two compact discs published by Crystal Records.

Vote has conducted or performed as baritone soloist in the premieres of works by Gian Carlo Menotti, William Thomas McKinley, and David Froom, among others. He recorded McKinley’s “Dallas, 1963” with the Slovak Radio Orchestra, which has been released on MMC Recordings. “Hearing the Call,” featuring new brass music conducted by Vote, was released on Sonora records in September of 1999. HE served as resident musical director to Interact; a Washington, D.C.-based theater company. With Interact he has performed and directed productions for The National Gallery of Art, The Folger Shakespeare Library, The Landsburg Theater, Arena Stage, and in a tour of the United Kingdom. He continues to serve as a yearly guest conductor for the River Concert Series and as co-artistic director of the Alba Music Festival in Alba, Italy. The 1993 production of “The Pirates of Penzance,” for which he was music director and conductor, won the award for Best Musical in the 1994 Helen Hayes Awards. He was nominated for Outstanding Musical Director for the production of “H.M.S. Pinafore” in 1996 and again in 2000 for “Pirates of Penzance.” He is also recipient of the Norton Dodge Award for Creative and Scholarly Achievement presented by St. Mary’s College of Maryland.

Lauded for her “theatrical magnetism” and “her big, rich voice,” mezzo-soprano Olivia Vote joined the roster of the Metropolitan Opera in the 2018-19 season for productions of “Die Walkure” and “Suor Angelica.” She made multiple house and role debuts throughout that season, beginning with the Inland Northwest Opera as Cherubino in “Le nozze di Figaro,” followed by the role of Komponist in “Ariadne auf Naxos” with the Cincinnati Opera.

Vote has also performed with the Atlanta Opera as Mary in “The Flying Dutchman,” with Opera Southwest as Adalgisa in “Norma,” and with North Carolina Opera as Maddalena in “Rigoletto.” On the concert stage, she was heard in Rossini’s “Stabat Mater” with the Choral Arts Society of Washington, D.C. under the baton of Antony Walker, and in Durefle’s “Requiem” at The Kennedy Center. She has appeared with the Sarasota Opera as Mère Marie in the “Dialogues des Carmélites” and Nicklausse in “Les contes d’Hoffmann” with  the Hawaii Opera Theater.

She has performed in Europe with the Hugo Wolf Quartet from Vienna, Austria, appearing in Respighi’s “Il Tramonto''  and in Switzerland with the Opernhaus Zürich. Highlights of her performances during this period included singing the role of Fidalma in “Il matrimonio segreto,” Philomene in Martinů’s “Zweimal Alexandre,” and as a soloist in Hans Neuenfels’s “Wie ich Welt wurde,” a co-production with the Zürich Schauspielhaus about the life of Richard Wagner.

In collaboration with pianist Brian Ganz, Vote performed multiple song recitals and went on to win second place at the esteemed Fort Worth McCammon Opera Guild Competition and first place at the Partners for the Arts, Inc. competition in Virginia. Vote participated as a Filene Young Artist with the Wolf Trap Opera Company. There she gained critical acclaim for her portrayal of Donna Elvira in “Don Giovanni” directed by Tomer Zvulum. She also covered the same role for the Los Angeles Philharmonic..

An eager and passionate fan of modern music. Vote has premiered several new roles and works. With the 21st Century Consort at the Smithsonian Institution in Washington D.C., she performed “Colors passing through us,” a chamber work written specifically for her by composer and friend David Froom.

Vote has been a grand finalist in the Francesco Vinas Competition in Barcelona. She won second place in the Loren L. Zachary Society Competition, Alfredo Silipigni International Vocal Competition, and Gerda Lisner Foundation International Competition. She is a grant winner from the Licia Albanese-Puccini Foundation, has been a New England and Mid- Atlantic regional finalist and study grant recipient in the Metropolitan Opera National Council auditions, was awarded a Sullivan Foundation Development Grant, and the Phyllis Curtin Career Award from Yale University.

Andrew Hardy is a native of Baltimore, Maryland, where he made his solo debut at age 15 with the Baltimore Symphony Orchestra,  performing Max Bruch’s “Violin Concerto No. 1 in G minor” after winning the BSO Young Soloists Competition. Hardy attended the Peabody Conservatory of Music at Johns Hopkins University, where he was winner of first prizes in the Concerto Competition and ”Concours” Recital Competition. He studied violin and chamber music with John Merrill, Charles Libove, Dorothy Delay, Stephen Kates, Ellen Mack, Berl Senofsky, Leon Fleisher and Raphel Druian. In 1983, Hardy won a prize, awarded by Isaac Stern, for his performances at the 92nd Street YMCA and at Carnegie Hall in the International American Music Competitions sponsored by Carnegie Hall and the Rockefeller Foundation.

Hardy served as co-concertmaster and soloist with the Fort Worth Symphony Orchestra and Chamber Orchestra in Texas, and from 1987-1990 lived and worked in Germany as soloist and first concertmaster of the Folkwang Kammerorchester Essen and the Württembergischen Kammerorchester Heilbronn. Hardy performed frequently as soloist in concertos by Bach, Tartini, Vivaldi, Haydn, Mozart, Bruch, Beethoven and Brahms. Since 1990, he has resided in Brussels, Belgium, and has pursued an active solo and chamber music career.  He has recorded broadly. Since 2002, Hardy has been a member of the Violin Jury at the Brussels Royal Conservatory of Music, the Liège Royal Conservatory, Belgium, and since 2015, with the Mons Royal Conservatory for violin evaluations (Bachelor B2-4 & Masters Degree M1-2 and Conservatory Competitions). From 2000 - 2018 he served as vice president and music director of the Belgian cultural organization “Les XXI,” organizing and performing in a series of chamber music concerts with outstanding international performers. Since 2016 he has served as co-founder, music director and violinist of “ARTS’ifice” - Concerts at the Château de la Hulpe, Brussels, Belgium; performing with musicians of outstanding international reputation.

Hardy has performed as soloist with numerous orchestras in the U.S., throughout Europe and in Russia, and regularly appears as recitalist, and chamber musician throughout Europe (Austria, Belgium, France, Germany, Holland, Italy, Norway, and Spain), and the United States. His repertoire embraces a broad range of works from Johann Sebastian Bach to present-day composers, with a strong interest not only in the great Master composers, but also in works of extreme merit by far-too-often neglected composers.

For many years, Hardy performed and recorded on a violin by Josef Guadagnini, Cremona, dating from 1783. He currently plays an instrument made in 2008 by his violinmaker father, Raymond Hardy, modeled after the “Heifetz” Guarnerius Del Gesu.

Brian Ganz is widely regarded as one of the leading pianists of his generation. A laureate of the Marguerite Long Jacques Thibaud and the Queen Elisabeth of Belgium International Piano Competitions, Ganz has appeared as soloist with such orchestras as the St. Louis Symphony, the St. Petersburg Philharmonic, the Baltimore Symphony, the National Philharmonic, the National Symphony and the City of London Sinfonia, and has performed with such conductors as Leonard Slatkin, Marin Alsop, Mstislav Rostropovich and Piotr Gajewski.

The Washington Post has written: “One comes away from a recital by pianist Brian Ganz not only exhilarated by the power of the performance but also moved by his search for artistic truth.” As one of Belgium’s leading newspapers, La Libre Belgique, put it, “We don’t have the words to speak of this fabulous musician who lives music with a generous urgency and brings his public into a state of intense joy.”

In 2011, Ganz began a multi-year project in partnership with the National Philharmonic to perform the complete works of Chopin at the Music Center at Strathmore outside of Washington, D.C. He is artist-in-residence at St. Mary’s College of Maryland and is also a member of the piano faculty of the Peabody Conservatory. He is the artist-editor of the Schirmer Performance Edition of Chopin’s Preludes (2005).