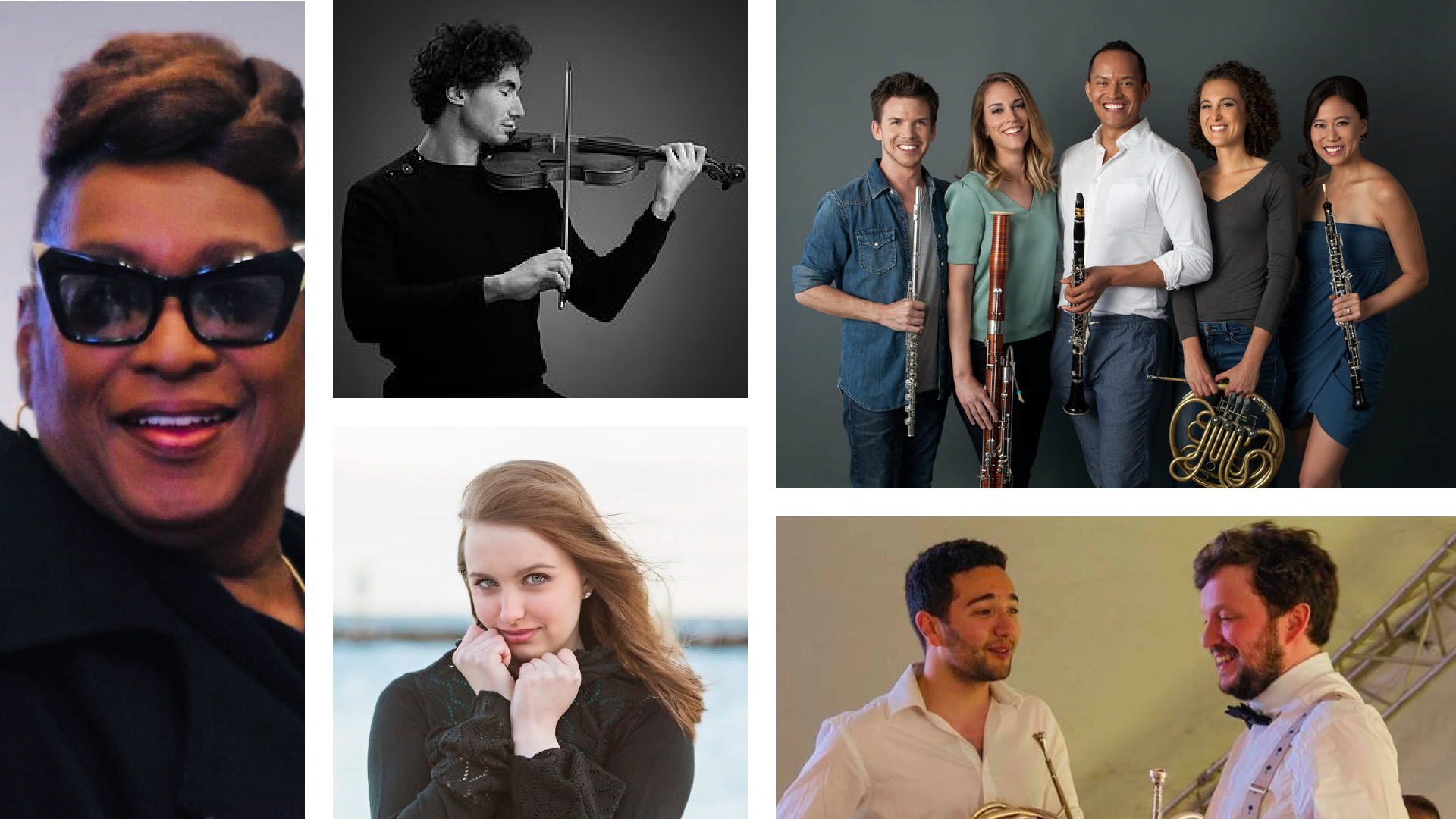 Performed by WindSync in an arrangement by Emily Tsai

from The Chesapeake Orchestra

Rachael Meador (soprano) is a classical vocalist, arts advocate, and recent graduate of St. Mary’s College of Maryland, where she majored in music. In addition to her many undergraduate performances, she sang in the 15th Annual Alba Music Festival in Italy in 2018. In December 2019, she joined the Distinguished Concerts Singers International in performing Handel’s “Messiah” at Carnegie Hall. She has performed at the National Cathedral and has been a soloist for Rutter's “Requiem.” Rachael continues to study voice and has recently begun teaching voice lessons.

Henrik Naimark Meyers began taking violin lessons at the age of six. He studied at the Royal College of Music in Stockholm, Sweden, graduating in 2011 with a bachelor’s degree. He continued his violin studies in Salzburg, Germany, at Universität Mozarteum and also at the Hanns Eisler Hochschule für Musik, Berlin. Meyers has been awarded many of Sweden´s most prestigious prizes and scholarships. In 2014 he won the Järnåker Foundation grant from the Royal Academy of Music and was a candidate for the Swedish Soloist Prize. He has been featured as a soloist with the Stockholm Royal Academy Symphony Orchestra after winning their annual soloist competition. Meyers has participated in many international masterclasses and festivals such as the Salzburger Kammermusikfestival, the Trondheim International Chamber Music Festival Academy 2014, the "Musethica" festival in Tel Aviv 2015 and is a member of the Swedish Chamber Soloists. In 2016 he premiered a piece by the Swedish composer Albert Schnelzer in the presence of the king and queen of Sweden. Meyers plays a Ludovico Guersan violin from 1755, lent to him from a private collection.

Nathaniel Silberschlag is principal horn of The Cleveland Orchestra.  Before that, he was assistant principal horn of the Washington National Opera/Kennedy Center Orchestra. At the age of 19, he was the youngest member of the Kennedy Center Orchestra. Silberschlag received his B.A. from The Juilliard School. He is the third generation of his family to attend the Juilliard School. He is a graduate of the National Symphony Orchestra Youth Fellowship program and spent two summers in the Kennedy Center’s Summer Music Institute. In 2015, Silberschlag was the first recipient of the Edwin C. Thayer, Laurel Bennert Ohlson award for artistry and excellence on the French horn.

Zachary Silberschlag is principal trumpet of The Hawaii Symphony in Honolulu. He has held principal trumpet positions with “The Orchestra Now" based in New York, the Chesapeake Orchestra, and the New York Festival Brass Quintet. He performs regularly at Carnegie Hall, New York's Lincoln Center, and at New York's Metropolitan Museum of Art.  Silberschlag holds a B.A. from St. Mary's College of Maryland, an M.A. from Manhattan School of Music, and a doctorate from the State University of New York at Stony Brook.

Award-winning pianist Lior Willinger performs as a solo and chamber artist in the U.S. and abroad. At the age of 19, he made his New York concerto debut at Carnegie Hall. An avid chamber musician, Willinger has collaborated in recitals with musicians of the Boston Symphony, Detroit Symphony, Baltimore Symphony, Atlanta Symphony, Cleveland Orchestra and Minnesota Orchestra. He currently serves as director of the Homewood Chamber Music Seminar, coaching student chamber groups at Johns Hopkins University. Willinger earned his bachelor and master of music degrees from the Peabody Conservatory, where he is currently pursuing a doctor of musical arts degree. Active in the Baltimore community, Willinger performs weekly for infusion patients at Sinai Hospital’s Lapidus Cancer Institute. He is the Founder/Artistic Director of the If Music Be the Food concert series in Baltimore which acts to increase support and awareness for those struggling with food insecurity. The series, which partners with Maryland Food Bank, has raised thousands of meals for those in need. He also serves as resident pianist for the Baltimore Symphony Orchestra's Orchkids program which provides a free music education to students in impoverished areas.

WindSync has established itself as a vibrant chamber ensemble performing wind quintet masterworks, adapting beloved music to their instrumentation, and championing new works by today’s composers. The quintet eliminates the "fourth wall" between musicians and audience by often performing from memory, creating an intimate connection. This personal performance style, combined with the ensemble’s three-pronged mission of artistry, education, and community-building, lends WindSync its reputation as ”a group of virtuosos who are also wonderful people, too" (Alison Young, Classical MPR).

WindSync launched an international touring career after winning the 2012 Concert Artists Guild Victor Elmaleh Competition and the 2016 Fischoff National Chamber Music Competition. In 2018, they were medalists at the M-Prize Chamber Arts Competition. WindSync has performed at the Met Museum, Ravinia, Shanghai Oriental Arts Center, and Weill Recital Hall at Carnegie Hall. In 2015, the quintet was invited by the Library of Congress to perform the world premiere of Paul Lansky’s “The Long and the Short of it,” commissioned by the Carolyn Royall Just Fund and the Chamber Music Society of Lincoln Center. Other premieres include “The Cosmos,” a concerto for wind quintet and orchestra by Pulitzer finalist Michael Gilbertson, and works by Ivan Trevino, John Steinmetz, Marc Mellits, and Erberk Eryilmaz.

WindSync’s thematic programming directly responds to the people and places where they work. In Houston, they curate a four-concert season and present the Onstage Offstage Chamber Music Festival each April, spotlighting everyday public spaces as gathering places for culture. In Louisiana’s Opelousas cultural district, WindSync was a pilot ensemble of Sound Places, a year-long project exploring the possibilities of creative placemaking through music led by Chamber Music America with funding from the National Endowment for the Arts. The ensemble's educational work includes tour stops at public schools and ongoing collaborations with Sistema Ravinia and the Houston Youth Symphony Coda social music programs. WindSync has been featured in educational concerts presented by the Seattle Symphony, the Hobby Center, and Orli Shaham's "Baby Got Bach,” and the ensemble’s concerts for young people reach over 5,000 students per year.

Sheryl-Marie Dunaway is the owner and artistic director of Ballet Caliente and has taught dance for over 30 years.  She began her training at age three with the British Ballet Academy studying RAD.  At 16, she was invited to become an apprentice with the San Francisco Ballet Company and danced with it for five consecutive summers.  She attended the National Academy of Dance in Champaign, Illinois, a performing arts boarding high school that was a feeder school for the American Ballet Theater.  She studied with the San Francisco Ballet, Ballet West, the Royal Winnipeg Ballet; Dance Aspen and the School of American Ballet with world-renowned teachers such as Lupe Serreno, Violette Verdy, Michael Maule, Harold and Lew Christiansen, Bene’ Arnold, Gus Giordano and Joe Termaine. Dunaway earned her B.A. degree in dance from Southern Methodist University. She has performed as a professional dancer and a guest artist with the Ballet El Paso, Ballet de Las Americas in Mexico, Ballet Fantastique, and the Monterey Peninsula Arts Company.  Dunaway enjoys writing and choreographing story ballets.  Locally, her dancers have performed with the St. Mary’s River Concert Series in collaboration with Jeffrey Silberschlag.  Additionally, they have performed the “Nutcracker” annually in conjunction with COSMIC orchestra and the National Ballet of the Ukraine.  The wife of an active duty Navy man, she has moved 17 times in 26 years of marriage and has taught several hundred students everywhere the Navy has taken her family, including Japan.  Dunaway feels her greatest success is in teaching dance. Many of her former students are dancing professionally, or are enrolled at highly accredited dance schools and universities.

Sung Hee Park is a recipient of the Best Music Award of the Republic of Korea and is an appointed ambassador for culture and arts by the South Korean government. After studying in Seoul, she continued to study at the National Conservatory of Music in Adria, Italy. Park was the first Asian to receive a doctorate from Corso Bienno.

Sherri Fenwick, a professional musician, has performed on the piano and organ since an early age. She received her education from St. Mary’s College of Maryland and Towson University. For 36 years, Sherri taught music and was one of the major choral directors in the St. Mary’s County Public Schools. She has been a minister of music in churches in the Maryland, D.C. and Virginia areas, organist at the St. Nicholas Base chapel and continues to serve where there is a need. Fenwick founded the St. Mary’s Gospel Choir and was its choral director from 1982 - 1987. Currently, she is choral director of the Southern Maryland Community Gospel Choir. ​

Long considered one of the nation's most accomplished trombonists, Bryan Bourne served for nearly 30 years in the United States Marine Band, "The President's Own."  He held the principal trombone chair for 23 of those years until his retirement in 2013.  As a member of the "The President's Own," Bryan performed frequently at the White House for presidents and heads of states. Additionally, Bourne has held the principal trombone position of the Chesapeake Orchestra since 1994 and he is also a member of the Washington Symphonic Brass.  He has played with all the major performing ensembles of the Baltimore/Washington region including the National Symphony Orchestra and the Kennedy Center Orchestra. In 2016, he appeared in Italy at the Alba Music Festival as soloist with the Romanian State Symphony at the Cathedral of San Domenico. Much sought after for his skill as a teacher, Bourne has taught trombone at St. Mary’s College of Maryland since 1990. He received his bachelor of music degree with high honors from Indiana University in 1979, having studied with Lewis Van Haney and Keith Brown.  In 1989 he completed his master of music degree at Catholic University, where he studied with Milton Stevens of the National Symphony Orchestra. Bourne has released a new recording as solo trombonist, titled "Transitions."