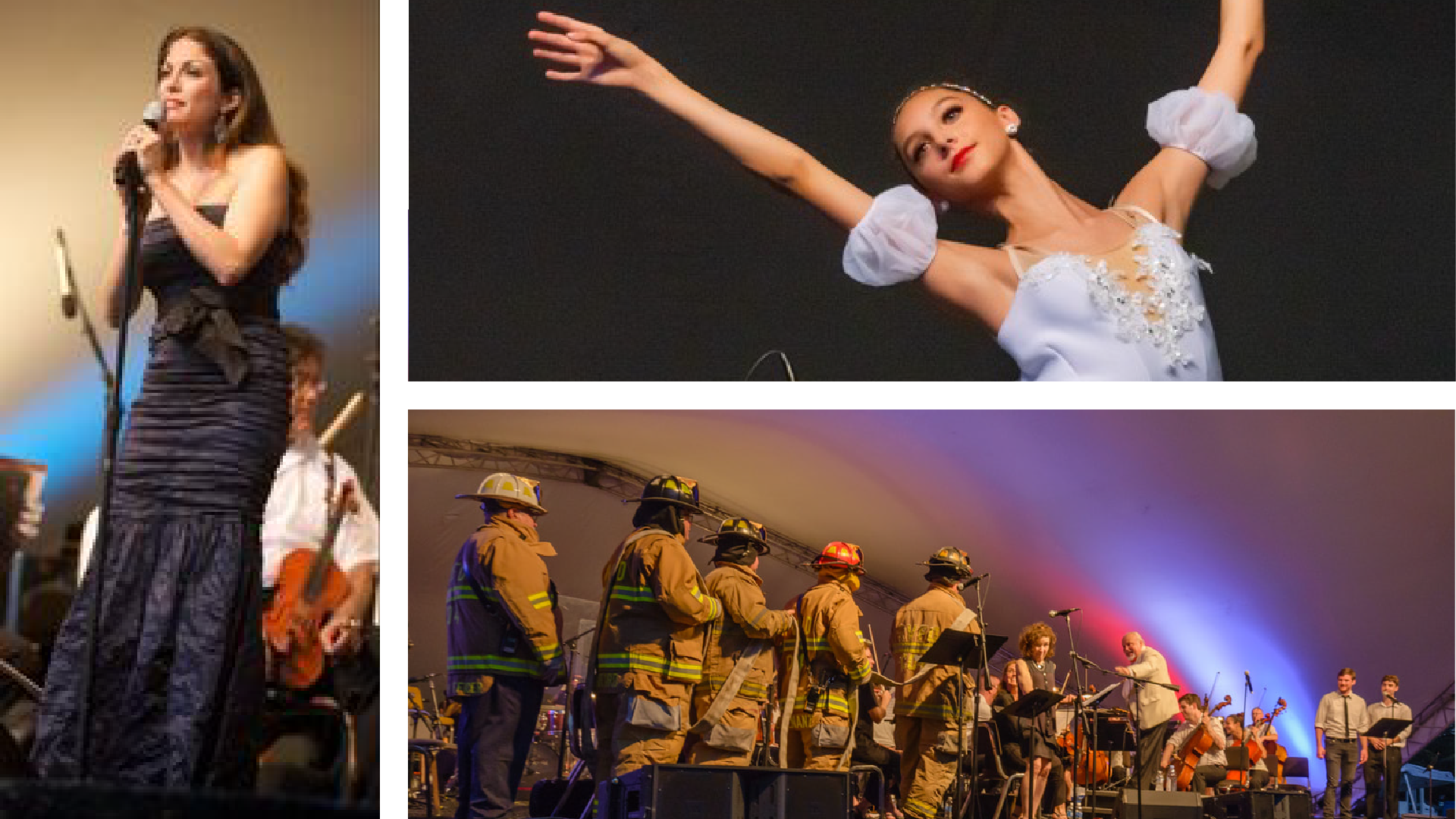 “The Lord is Blessing Me”

“The Blood Still Works/The Blood Will Never Lose Its Power”

“A Fourth of July Finale”

Hilary Kole, a native New Yorker, studied composition at Manhattan School of Music, started her professional singing career at the legendary Rainbow Room. In addition to performing at famed Manhattan venues like Town Hall, Birdland, Blue Note, Iridium, 54 Below, Jazz at Lincoln Center and Carnegie Hall (with Michael Feinstein and The New York Pops), she made her concert-hall debut at Lincoln Center as part of the “American Songbook Series.” In 2007, she appeared at Carnegie Hall in a tribute to Oscar Peterson, a performance reprised in January 2008 at the Canadian Memorial to Peterson at Roy Thompson Hall alongside Quincy Jones, Herbie Hancock, and Nancy Wilson. Kole has  headlined at the Umbria Jazz Festival, the Montreal Jazz Festival, the Nairn Jazz Festival, and the Cotton Club and Blue Note in Japan. She followed her 2009 debut album, “Haunted Heart” (produced by and featuring jazz-guitar great John Pizzarelli), a Gold Disc Award winner in Japan, with “You Are There,” an ambitious compilation featuring vocal-piano duets with legendary pianists including Dave Brubeck, Michel Legrand, Benny Green, Cedar Walton, Hank Jones and Kenny Barron. “You Are There” won a New York Bistro Award for record of the year and received national recognition as a USA Today Best Album of the Year.  She has appeared at the Alba Music Festival in Italy and twice performed with the Chesapeake Orchestra in collaboration with  Jeffrey Silberschlag.

Long considered one of the nation's most accomplished trombonists, Bryan Bourne served for nearly 30 years in the United States Marine Band, "The President's Own."  He held the principal trombone chair for 23 of those years until his retirement in 2013.  As a member of the "The President's Own," Bryan performed frequently at the White House for presidents and heads of states. Additionally, Bourne has held the principal trombone position of the Chesapeake Orchestra since 1994 and he is also a member of the Washington Symphonic Brass.  He has played with all the major performing ensembles of the Baltimore/Washington region including the National Symphony Orchestra and the Kennedy Center Orchestra. In 2016, he appeared in Italy at the Alba Music Festival as soloist with the Romanian State Symphony at the Cathedral of San Domenico. Much sought after for his skill as a teacher, Bourne has taught trombone at St. Mary’s College of Maryland since 1990. He received his bachelor of music degree with high honors from Indiana University in 1979, having studied with Lewis Van Haney and Keith Brown.  In 1989 he completed his master of music degree at Catholic University, where he studied with Milton Stevens of the National Symphony Orchestra. Bourne has released a new recording as solo trombonist, titled "Transitions."

Sherri Fenwick, a professional musician, has performed on the piano and organ since an early age. She received her education from St. Mary’s College of Maryland and Towson University. For 36 years, Sherri taught music and was one of the major choral directors in the St. Mary’s County Public Schools. She has been a minister of music in churches in the Maryland, D.C. and Virginia areas, organist at the St. Nicholas Base chapel and continues to serve where there is a need. Fenwick founded the St. Mary’s Gospel Choir and was its choral director from 1982 - 1987. Currently, she is choral director of the Southern Maryland Community Gospel Choir. ​

Award-winning pianist Lior Willinger performs as a solo and chamber artist in the U.S. and abroad. At the age of 19, he made his New York concerto debut at Carnegie Hall. An avid chamber musician, Willinger has collaborated in recitals with musicians of the Boston Symphony, Detroit Symphony, Baltimore Symphony, Atlanta Symphony, Cleveland Orchestra and Minnesota Orchestra. He currently serves as director of the Homewood Chamber Music Seminar, coaching student chamber groups at Johns Hopkins University. Willinger earned his bachelor and master of music degrees from the Peabody Conservatory, where he is currently pursuing a doctor of musical arts degree. Active in the Baltimore community, Willinger performs weekly for infusion patients at Sinai Hospital’s Lapidus Cancer Institute. He is the Founder/Artistic Director of the If Music Be the Food concert series in Baltimore which acts to increase support and awareness for those struggling with food insecurity. The series, which partners with Maryland Food Bank, has raised thousands of meals for those in need. He also serves as resident pianist for the Baltimore Symphony Orchestra's Orchkids program which provides a free music education to students in impoverished areas.

Sheryl-Marie Dunaway is the owner and artistic director of Ballet Caliente and has taught dance for over 30 years.  She began her training at age three with the British Ballet Academy studying RAD.  At 16, she was invited to become an apprentice with the San Francisco Ballet Company and danced with it for five consecutive summers.  She attended the National Academy of Dance in Champaign, Illinois, a performing arts boarding high school that was a feeder school for the American Ballet Theater.  She studied with the San Francisco Ballet, Ballet West, the Royal Winnipeg Ballet; Dance Aspen and the School of American Ballet with world-renowned teachers such as Lupe Serreno, Violette Verdy, Michael Maule, Harold and Lew Christiansen, Bene’ Arnold, Gus Giordano and Joe Termaine. Dunaway earned her B.A. degree in dance from Southern Methodist University. She has performed as a professional dancer and a guest artist with the Ballet El Paso, Ballet de Las Americas in Mexico, Ballet Fantastique, and the Monterey Peninsula Arts Company.  Dunaway enjoys writing and choreographing story ballets.  Locally, her dancers have performed with the St. Mary’s River Concert Series in collaboration with Jeffrey Silberschlag.  Additionally, they have performed the “Nutcracker” annually in conjunction with COSMIC orchestra and the National Ballet of the Ukraine.  The wife of an active duty Navy man, she has moved 17 times in 26 years of marriage and has taught several hundred students everywhere the Navy has taken her family, including Japan.  Dunaway feels her greatest success is in teaching dance. Many of her former students are dancing professionally, or are enrolled at highly accredited dance schools and universities.

​President/CEO of Go-DIVA! Productions, Inc. and professional vocalist Jennifer Cooper offers a unique, deeply varied repertoire of entertainment in an effort to blur the boundaries of genres and styles. Before taking the stage as a jazz, blues and pop songstress, Cooper sustained a successful, professional opera career during which she received rave reviews for more than 30 principal roles and various concert appearances throughout Europe, Canada and the U.S., and accumulated coveted top prizes in competitions including the Metropolitan Opera National Council, National Symphony Orchestra Young Artists, and others. She has created, produced and starred in several original music productions, including her one-woman, auto-biographical musical cabaret, “Go-DIVA! ~ of Song, Silence & the Abuse of Chocolate” (written by LB Hamilton), “Velvet Nights” (international cabaret), “Sentimental Journey” (WWII era tribute), “Only Yesterday” (Carpenters tribute), and most recently, “Go-DIVA! Act III: The Swan Takes Flight.” In addition, her popular showcase series, “Opera Night” and “Broadway Night” consistently play to sold-out audiences in the southern Maryland region. With her current ensemble, GrooveSpan, Cooper remains in high demand for various venues, music festivals, concert series, and private events. She also serves as a highly respected private voice instructor and vocal technique master class facilitator in the east coast region.

A 20-year veteran of the bandstand, Carl Reichelt excels in genres ranging from rock to jazz, blues to art song, on both electric and acoustic guitar. A prolific composer, arranger and songwriter, Reichelt is also known for his work with local iconic groups such as Square Noon, Romi, Upstroke, and Round Midnite, a popular regional rock band that attracted a devoted following during its 15-year run. Reichelt has shared the stage with Cooper as a member of Retroact, and performs regularly with Groovespan, of which he is an original founding member.