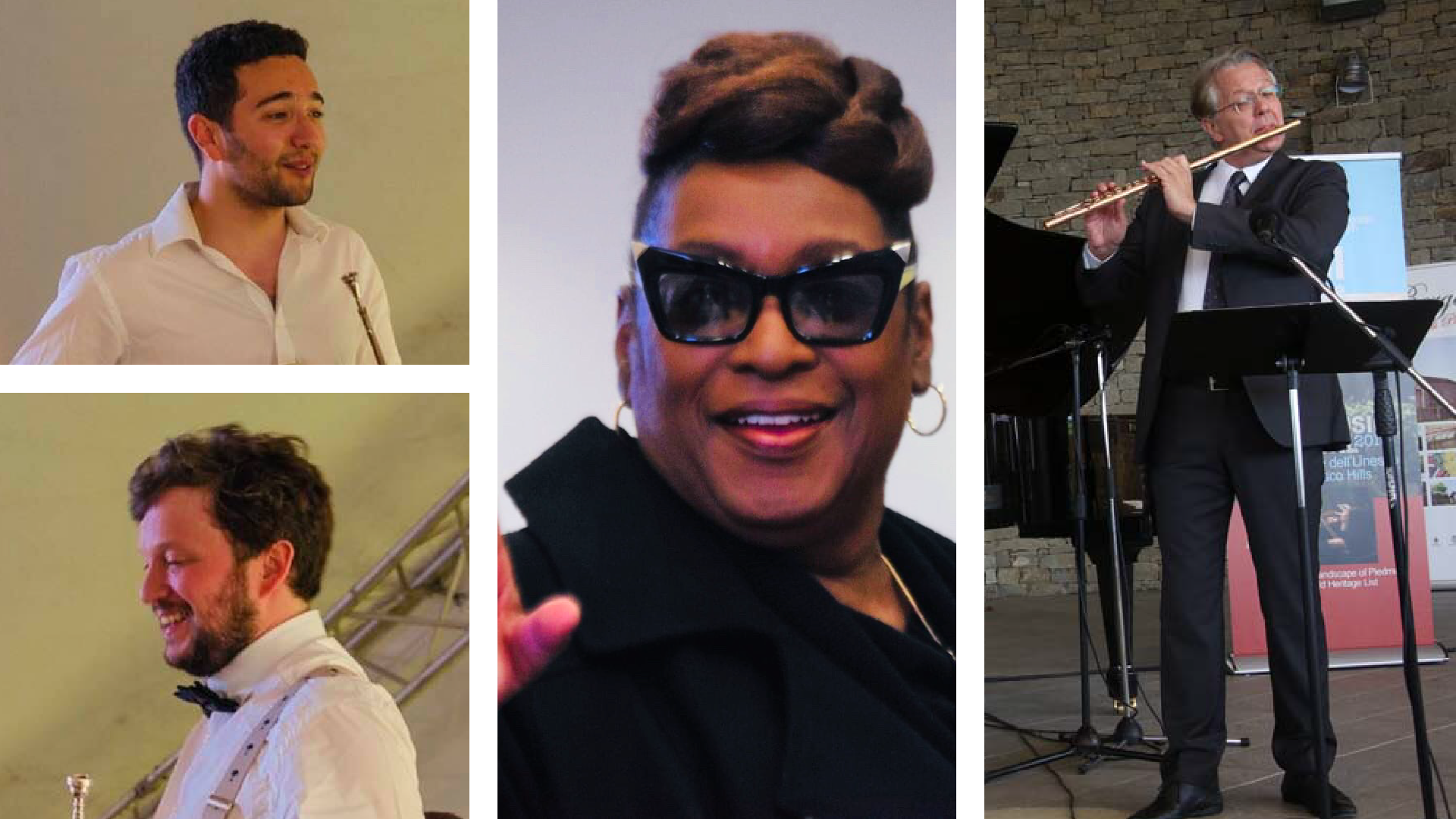 6:15 p.m. Pre-Concert (Due to technical difficulties, the pre-concert will not take place as planned)

"Let Us Break Bread Together"

with the Chesapeake Orchestra Brass:

Fantasia Su "Il Giuramento" Fantasy on the opera "The Oath"

M. Derrick Miller is a 2020 graduate of St. Mary's College of Maryland. While a student, Miller was a member of PING, Chamber Singers, SMC-Men and the student-run jazz combo, "No Time Five." He was also a member of the College Orchestra and Jazz Band. Miller is in a certificate program at UMBC in Contemporary American Music, to be followed by a master's degree.

Nathaniel Silberschlag is principal horn of The Cleveland Orchestra.  Before that, he was assistant principal horn of the Washington National Opera/Kennedy Center Orchestra. At the age of 19, he was the youngest member of the Kennedy Center Orchestra. Silberschlag received his B.A. from The Juilliard School. He is the third generation of his family to attend the Juilliard School. He is a graduate of the National Symphony Orchestra Youth Fellowship program and spent two summers in the Kennedy Center’s Summer Music Institute. In 2015, Silberschlag was the first recipient of the Edwin C. Thayer, Laurel Bennert Ohlson award for artistry and excellence on the French horn.

Zachary Silberschlag is principal trumpet of The Hawaii Symphony in Honolulu. He has held principal trumpet positions with “The Orchestra Now" based in New York, the Chesapeake Orchestra, and the New York Festival Brass Quintet. He performs regularly at Carnegie Hall, New York's Lincoln Center, and at New York's Metropolitan Museum of Art.  Silberschlag holds a B.A. from St. Mary's College of Maryland, an M.A. from Manhattan School of Music, and a doctorate from the State University of New York at Stony Brook.

Described as one of the most outstanding Italian flutists of his generation, Giuseppe Nova made his debut in 1982 as a soloist with the RAI Symphony Orchestra. This marked the beginning of a brilliant career which has led him to perform in the most prestigious concert halls in Europe, the United States and Asia. He has taught at the Accademia di Pescara, at the Arts Academy Foundation in Rome, at the Scuola di Saluzzo, and as visiting artist at St. Mary’s College of Maryland. He has recorded extensively. Nova received the European Award for Artistic and Cultural Activities in Prague, a Chamber Music Award in Kyoto, and in 2018 was appointed BMIMF Best Artist at the Korean Busan Maru International Festival. He now teaches at the Conservatoire de la Vallée d'Aoste.

Sherri Fenwick, a professional musician, has performed on the piano and organ since an early age. She received her education from St. Mary’s College of Maryland and Towson University. For 36 years, Sherri taught music and was one of the major choral directors in the St. Mary’s County Public Schools. She has been a minister of music in churches in the Maryland, D.C. and Virginia areas, organist at the St. Nicholas Base chapel and continues to serve where there is a need. Fenwick founded the St. Mary’s Gospel Choir and was its choral director from 1982 - 1987. Currently, she is choral director of the Southern Maryland Community Gospel Choir.

Award-winning pianist Lior Willinger performs as a solo and chamber artist in the U.S. and abroad. At the age of 19, he made his New York concerto debut at Carnegie Hall. An avid chamber musician, Willinger has collaborated in recitals with musicians of the Boston Symphony, Detroit Symphony, Baltimore Symphony, Atlanta Symphony, Cleveland Orchestra and Minnesota Orchestra. He currently serves as director of the Homewood Chamber Music Seminar, coaching student chamber groups at Johns Hopkins University. Willinger earned his bachelor and master of music degrees from the Peabody Conservatory, where he is currently pursuing a doctor of musical arts degree.

Noted for his “rich, pure sound” by the San Francisco Classical Voice, clarinetist Alec Manasse studied at The Juilliard School. He has performed with many of New York City’s top orchestras, including the Orchestra of Saint Luke’s and the American Ballet Theater. Manasse regularly performs chamber music at the Cape Cod Chamber Music Festival and The Festival de Musique in St. Barthelemy. A two-time fellow at the Colorado College Summer Music Festival, he has collaborated with members of The Ying Quartet and pianist Jon Nakamatsu.

Bassist Milad Daniari has been a member of the Shreveport Symphony since 2019 and maintains a dynamic career with orchestras on the East Coast including the American Ballet Theatre, Albany Symphony, and the Vermont Symphony in addition to serving as principal bass with Pegasus: The Orchestra. Daniari regularly performs at major venues including Carnegie Hall, the David H. Koch Theater, the Metropolitan Opera House, Alice Tully Hall, Jazz at Lincoln Center, and the Metropolitan Museum of Art. Previously, he served as co-principal bass with The Orchestra Now and has served as principal bass with the Chesapeake Orchestra. Daniari graduated from the Manhattan School of Music and earned his master of music degree from Bard College.