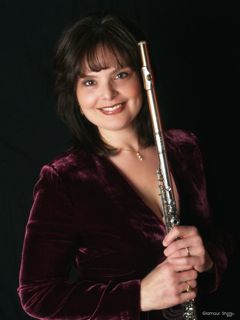 Karen Johnson is known as a colorful and virtuosic stylist of both solo and chamber music repertoire.  She has served as principal flutist of the Washington Bach Consort for twelve years and is the Co-Principal of the Chesapeake Orchestra. The Washington Post has described her playing as "exquisite" and "mesmerizing" and in another recent review the Post said " ... flutist Karen Johnson wrought unforgettable magic." She has performed throughout the United States and Mexico with the Takacs String Quartet, the Bach Aria Group and popular artist Stevie Wonder. She has also performed with the Bethlehem Bach Festival, the Shelter Island Music Festival and the Glimmerglass Chamber Music Festival. Her recent recital venues include the National Gallery of Art, the Romanian Embassy, the French Embassy and the Icelandic Embassy.  She also appears regularly at the Kennedy Center and the Washington National Cathedral. Highlights of the 2009-2010 season include world premieres of Poems of Rumi for Soprano, flute and piano by Thomas Benjamin (October 3, 2009) and Formas Del Viento for flute and percussion by Alejandro Vinao (February 12, 2010). Ms. Johnson has commissioned and premiered new works by William Albright and Jeffrey Mumford, on whose CD, the focus of blue light, she is featured.  She has won numerous competitions and awards, including a solo recitalist grant from the Maryland State Arts Council.  She is currently working on a flute and piano CD, From the Americas, with pianist Carlos Rodriquez. Ms. Johnson is on the faculties of the Levine School of Music, St. Mary's College of Maryland and the Northern California Flute Camp in Carmel.  She is also an active participant in the "Bach to School" music outreach program in the District of Columbia. A dedicated student of Yoga and meditation, Ms. Johnson has developed a course entitled "Performing With Heart" which invites students to explore ways of creating more joyful performing experiences. With colleagues Carlos Rodriquez, piano; John Kilkenny, percussion and Astrid Walschot-Stapp, harp, Ms. Johnson has recently formed a new musical ensemble DANCING HEART, a group dedicated to inspired performances that transform audiences.