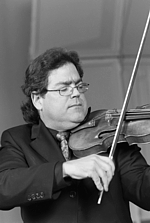 Violinist José Miguel Cueto was born in Puerto Rico, where he received his early musical training. After graduating from the Pablo Casals Conservatory of Music of Puerto Rico, he was awarded scholarships from the Institute of Culture of Puerto Rico and the Peabody Conservatory of Johns Hopkins University, where he earned both his bachelor's and master's degrees, studying under laureate violinist, Berl Senofsky. During his time at Peabody he served as concertmaster of the conservatory orchestra and was chosen to perform Vivaldi's Triple Violin Concerto in the "Masters of Today and Tomorrow" concert series with his teacher Senofsky and Ruggiero Ricci, internationally distinguished violinists. Cueto is in great demand as chamber musician, having performed with the Kennedy Center, Tidewater and Casals Festival Chamber Players, Washington Chamber Society, Melos Ensemble with internationally renowned clarinetist Gervase de Peyer, La Gesse Festival in France, Autunno Musicale Veronese and Alba Music Festival in Italy, and Three World Festival in China. At home with both traditional and contemporary repertoire, he has premiered several contemporary chamber music compositions by composers of the Américas. With longtime collaborator, Argentine pianist Nancy Roldán, he founded Alborada, a chamber music ensemble.  As soloist, Cueto has performed in the US, Latin America, Europe, and Asia. Cueto has been admired by both the public and the critics for his "solid technique, as well as his rich and beautiful tone" (El Mundo, San Juan). STRAD magazine recognized Cueto's Carnegie Hall performance at Weill Recital Hall as "grounded, confident, and superb in all particulars. Cueto is concertmaster of Concert Artists of Baltimore and the Chesapeake Festival Orchestra. He is a recording artist and serves as artist in residence and head of the strings department at St. Mary's College of Maryland. He is also lecturer for the Elder-hostel program at the Peabody Conservatory of Johns Hopkins University.