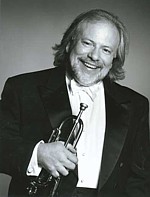 Jeffrey Silberschlag has distinguished himself in the world of music, performing as conductor and trumpet soloist throughout Europe, the United States, Russia, China, Japan, and Israel. His performances have been described as “compelling” by Germany’s Kolnische Rundschau; “extraordinary” by Italy’s L’Arena; and “outstanding” by Fanfare Magazine. In 2011 at a performance in Prague, Mr. Silberschlag received the Prize for Artistic and Cultural Activities from the European Union of the Arts, for his lifetime achievement in classical music as a conductor and trumpeter. He serves as Head of Music Performance at St. Mary’s College of Maryland and has held the Steven Muller Distinguished Professor in the Arts. Mr. Silberschlag has appeared as guest conductor with the London Symphony Orchestra, London Philharmonic, St. Petersburg Soloists, Orchestra Filharmonici di Torino, Symphony Orchestra of Rumania, Bulgarian Philharmonic, La Scala Virtuosi, Prague Chamber Orchestra, Salzburg Chamber Orchestra, and the Moscow Academy Chamber Orchestra. He has presented master classes at the Kyoto University of Performing Arts, Japan; the Prague Conservatory, Czech Republic; the Royal Academy of Music in London, UK; the Beijing Central Conservatory in China; the Aosta Institute for Music, Italy; and he has directed in performance the orchestra of the Cleveland Institute of Music. Mr. Silberschlag has held principal trumpet positions with the Italian National Symphony RAI- Torino, Jerusalem Symphony, and the New York City Opera National Company. In 2013, Naxos re-released two of his recordings, “The Music of Morton Gould” and “The American Trumpet.” In his recording of McKinley’s “And the Presidents Said,” with narrator Ben Bradlee at Abbey Road Studio, Fanfare Magazine wrote that he is “a virtuoso trumpeter par excellence whose conducting is equally praise worthy.” In 2013, Mr. Silberschlag was inducted into the Society Famija Albeisa. Mr. Silberschlag is music director and conductor of the Chesapeake Orchestra and the River Concert Series in Maryland and co-director of the Italy & USA Alba Music Festival held in northern Italy. He is a Professor of Music at St. Mary’s College of Maryland and has recently become the Music Director of the Maryland Youth Symphony Orchestra in Baltimore.