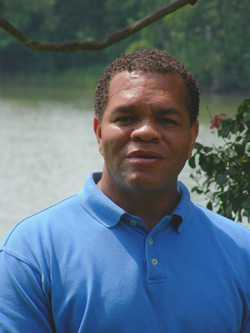 Jeffrey Lamar Coleman received a B.A. in Communications, with an emphasis in journalism and advertising, from Winthrop University, an M.F.A. in Creative Writing, with an emphasis in poetry, from Arizona State University, and a Ph.D. in American Studies, with an emphasis in literature and culture, from the University of New Mexico. Between undergraduate and graduate studies, Coleman worked on Madison Avenue as an advertising copywriter for Young and Rubicam, New York. Coleman is the author of Words of Protest, Words of Freedom: Poetry of the American Civil Rights Movement and Era, published by Duke University Press, and Spirits Distilled: Poems, published by Red Hen Press. He is also associate editor and poetry editor of The Journal of Hip Hop Studies, and has served as guest curator and editor for Delaware Poetry Review and poetry editor for Hayden’s Ferry Review. In addition, he has been interviewed about American poetry and culture by Tavis Smiley, Andrew Toncovich, Rev. Antoinette Gardner, Tom Hall, and others.