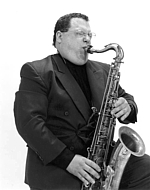 Don Stapleson is well known locally and in the Washington metropolitan area. An accomplished saxophonist and respected flutist, he performs with his own group, The Don Stapleson Quartet, as well as with the popular classical/jazz crossover group, Allegro con Trio. He has performed with Ray Charles, Dexter Gordon, Nancy Wilson, and recent Rock and Roll Hall of Fame inductee Martha Reeves; he has also appeared on MTV with Danny Gatton. Among his other accomplishments, Mr. Stapleson has performed at the National Theater as a member of the pit orchestra during its productions of Annie Get Your Gun and Cats. He is a former member of the Peabody Ragtime Ensemble and has recently appeared as guest soloist with the Chesapeake Chamber Orchestra. He has also been heard in the orchestra at the Folger Theater during the Interact Theater productions of Noel Coward's Private Lives and Gilbert & Sullivan's H.M.S. Pinafore. Among his more recent accomplishments, Mr. Stapleson has been busy in the recording studio. His flute playing can be heard on television's America's Most Wanted, The National Geographic Special The Inca Ice Maiden, and The Serval Cats, in the upcoming PBS series, Realms of the Deep. Mr. Stapleson attended the Berklee College of Music and holds degrees from St. Mary's College of Maryland and the University of Maryland. He teaches saxophone and directs both the Jazz Combo and the Jazz Ensemble at St. Mary's. Don Stapleson can be heard with the rock group Xyra and Verborgen on their recently released CD.