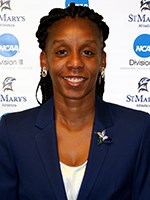 Crystal Gibson was named the director of athletics & recreation in June 2020, following the retirement of longtime director Scott Devine. In her position, Gibson will be responsible for providing leadership and direction to ensure success in the athletics and recreation program while supporting the mission, goals and objectives of the College.

In addition to those roles, she was the senior woman administrator, compliance coordinator, and gameday management supervisor. The Randallstown, Maryland, native is no stranger to Seahawk athletics, having served six years as head women's basketball coach and senior woman administrator from 2011 to 2017. She guided the Seahawks to five consecutive playoff berths in the highly competitive Capital Athletic Conference (CAC) and served as the CAC Women’s Basketball Chair between 2014 and 2017. As the SWA, Gibson initiated and chaired the department’s first-ever Title IX review.

Gibson completed the NCAA Pathways Program in 2017. The Pathway Program is designed to elevate those currently in senior-level positions within athletics administration to the next step as a director of athletics.She is a member of Lebanon Valley College’s Athletic Hall of Fame as an All-American high jumper and four-year starter on the Dutchmen women’s basketball team.