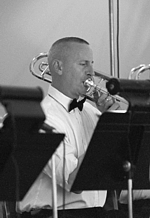 Bryan Bourne has taught trombone at St. Mary's College of Maryland since 1990. He received his bachelor of music degree with high honors from Indiana University in 1979, having studied with Lewis Van Haney and Keith Brown.  In 1989 he completed his master of music degree at Catholic University, where he studied with Milton Stevens of the National Symphony Orchestra. Currently living in the Washington, D.C. area, he is a member of "the President's Own" United States Marine Band. Acting in his own capacity, he is principal trombone with the Alexandria Symphony Orchestra and was principal trombone with the RAI Orchestra in Turin, Italy. He is second trombone with the Baltimore Opera Orchestra. He has performed with the Kennedy Center Opera and Ballet Orchestras and the National Symphony Orchestra. In addition to his orchestral experience, Bryan Bourne continues to perform regularly in two chamber ensembles of which he was an original member: Washington Symphonic Brass and Percussion Ensemble, and the Fessenden Ensemble. In addition to teaching at St. Mary's, Mr. Bourne maintains a large studio at his home in Alexandria, Virginia, where he teaches a wide range of students.