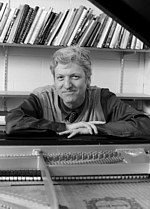 Brian Ganz is widely regarded as one of the leading pianists of his generation. After a 1995 recital at the Kennedy Center, Washington Post critic Mark Carrington wrote: "There has never been any doubt that Brian Ganz is a good pianist, but last night's recital at the Kennedy Center's Terrace Theater offered strong evidence that he is a great one." Brian Ganz was winner of one of two First Grand Prizes awarded in the 1989 Marguerite Long Jacques Thibaud International Piano Competition in Paris, where he was also awarded special prizes for the best recital round of the competition and the best performance of the required work. That same year he won a Beethoven Fellowship awarded by the American Pianists Association, and in 1991 he was a silver medalist with third prize in the Queen Elisabeth of Belgium International Piano Competition. After his performance in the finals of the Brussels competition, the critic for La Libre Belgique wrote: "We don't have the words to speak of this fabulous musician who lives music with a generous urgency and brings his public into a state of intense joy." Mr. Ganz has appeared as soloist with such orchestras as the St. Louis Symphony, the St. Petersburg Philharmonic (of Russia), the Baltimore Symphony, the National Symphony, the Buffalo Philharmonic, the Memphis Symphony, the City of London Sinfonia, L'Orchestre Lamoureux, and L'Orchestre Philharmonique de Monte Carlo. He has performed in such halls as the Kennedy Center Concert Hall, Salle Pleyel in Paris, Le Palais des Beaux-Arts in Brussels, De Doelen in Rotterdam, Suntory Hall in Tokyo, L'Arena Theater in Verona, and the Sibelius Academy in Helsinki. Mr. Ganz made his recording debut in 1992 for the Gailly label in Belgium, and his recordings of works of Chopin and Dutilleux have been released on the Accord label in Paris. In 2001 he began a project with Maestoso Records in which he will record the complete works of Frederic Chopin. The project is scheduled for completion in 2010, the 200th anniversary of the composer's birth. Mr. Ganz's recent concert highlights include performances of Beethoven's Fourth Piano Concerto with Marin Alsop and the Colorado Symphony in March of 1999, debuts in Korea with the Daejeon Philharmonic and in Switzerland with the St. Petersburg Philharmonic in 2001, and a performance of Mozart's Piano Concerto No. 20 with David Loebel and the Memphis Symphony in March of 2003. He has also performed under the baton of such conductors as Leonard Slatkin, Mstislav Rostropovich, Philippe Entremont, Pinchas Zukerman, Leon Fleisher, Jerzy Semkow, George Manahan, and Gustav Meier. Mr. Ganz is a graduate of the Peabody Conservatory of Music, where he studied with Leon Fleisher. Earlier teachers include Ylda Novik and the late Claire Deene. An enthusiastic teacher, Mr. Ganz is artist-in-residence at St. Mary's College of Maryland, where he has been a member of the piano faculty since 1986, and in 2000 he joined the piano faculty of the PeabodyConservatory. In December of 2001 he was honored to serve on the jury of the Long Thibaud competition in Paris. Mr. Ganz has remarked, "I am an active explorer of the many ways in which the study and performance of great music can remind us of the Spirit which unites all living things." He has donated numerous performances in benefit concerts and was a founding member of the Washington Chapter of Artists to End Hunger.