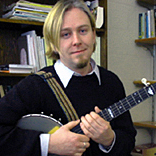 Bradley Douglas Park received his PhD in philosophy from the University of Hawai‘i in 2004 and joined the Department of Philosophy and Religious Studies at St. Mary’s College of Maryland that same year. He teaches of courses in East Asian philosophy, continental philosophy, and embodied cognition. In his spare time, he studies mountain banjo and the old time music of central West Virginia and Eastern Kentucky. He is currently on sabbatical for the 2018-2019 academic year.