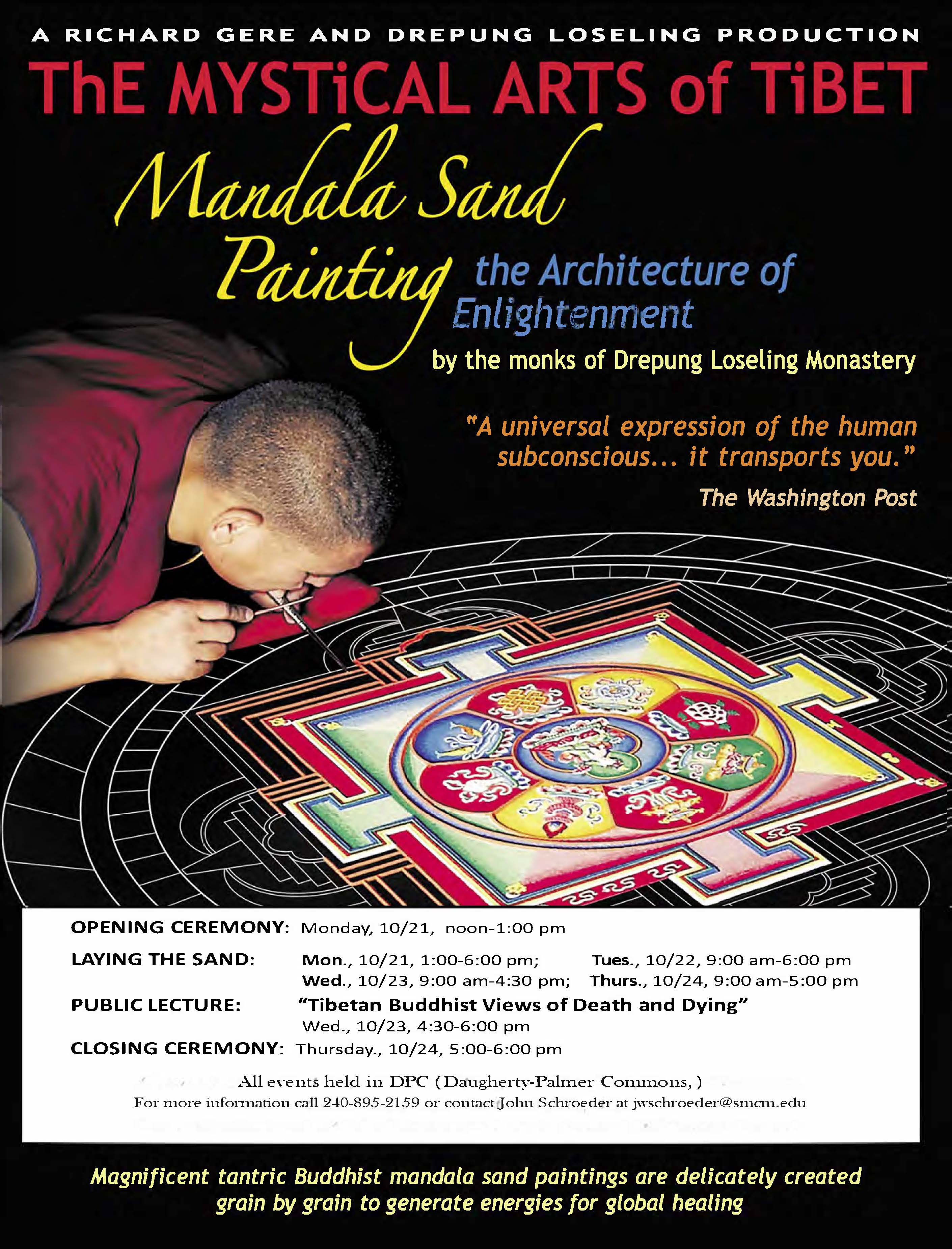 The Tibetan Buddhist Monks from Drepung Loseling Monastery will be constructing a Mandala Sand Painting Oct. 21-Oct. 24. The mandala sand painting begins with the opening ceremony, during which the lamas consecrate the site and call forth the forces of goodness. This is done by means of chanting, music and mantra recitation.

From all the artistic traditions of Tantric Buddhism, that of painting with colored sand ranks as one of the most unique and exquisite. Millions of grains of sand are painstakingly laid into place on a flat platform over a period of days or weeks to form the image of a mandala. To date the monks have created mandala sand paintings in more than 100 museums, art centers, and colleges and universities in the United States and Europe.

Mandala is a Sanskrit word meaning sacred cosmogram. These cosmograms can be created in various media, such as watercolor on canvas, wood carvings, and so forth. However, the most spectacular and enduringly popular are those made from colored sand.

In general all mandalas have outer, inner and secret meanings. On the outer level they represent the world in its divine form; on the inner level they represent a map by which the ordinary human mind is transformed into enlightened mind; and on the secret level they depict the primordially perfect balance of the subtle energies of the body and the clear light dimension of the mind. The creation of a sand painting is said to effect purification and healing on these three levels.

The lamas begin the exhibit by drawing an outline of the mandala on the wooden platform. On the following days they lay the colored sands. Each monk holds a traditional metal funnel called a chak-pur while running a metal rod on its grated surface. The vibration causes the sands to flow like liquid onto the platform.

The event will take place all week through the closing ceremony.  Traditionally most sand mandalas are destroyed shortly after their completion. This is done as a metaphor for the impermanence of life. The sands are swept up and placed in an urn; to fulfill the function of healing, half is distributed to the audience at the closing ceremony, while the remainder is carried to a nearby body of water, where it is deposited. The waters then carry the healing blessing to the ocean, and from there it spreads throughout the world for planetary healing.

Hosted by the Asian Studies Program, we are grateful to our co-sponsors the Lecture and Fine Arts Committee, Student Government Association, the Arts Alliance, and departments of music, philosophy & religious studies, English, art & art history, sociology, history and international languages and cultures, the Asian Pacific American Club, and Office of the Provost.