MD History: "Who came first? State Declarations of Rights in the Revolutionary Era"

Center for the Study of Democracy 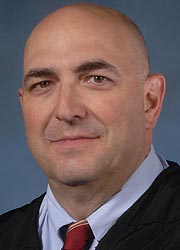 "Who came first? State Declarations of Rights in the Revolutionary Era"

Join the St. Mary's community in welcoming the Honorable Daniel A. Friedman, Maryland Court of Special Appeals, as he delivers a lecture titled "Who came first? State Declarations of Rights in the Revolutionary Era." Judge Friedman's lecture explores the evolution of legal and political rights during the revolutionary era and asks the following questions: What formed the basis for individual rights in the English colonies prior to and during the Revolutionary period? Which state, including those in the Chesapeake region, can lay claim to having been the first to develop a Declaration of Rights?

This lecture is the inaugural address in the St. Mary’s County Historical Society’s series, Historically Speaking -- lectures by scholars and researchers that shed new light on the political, social, cultural, and economic development of colonial Maryland. This event is sponsored by the St. Mary's County Historical Society, the Center for the Study of Democracy, and the Department of Anthropology at St. Mary's College of Maryland.